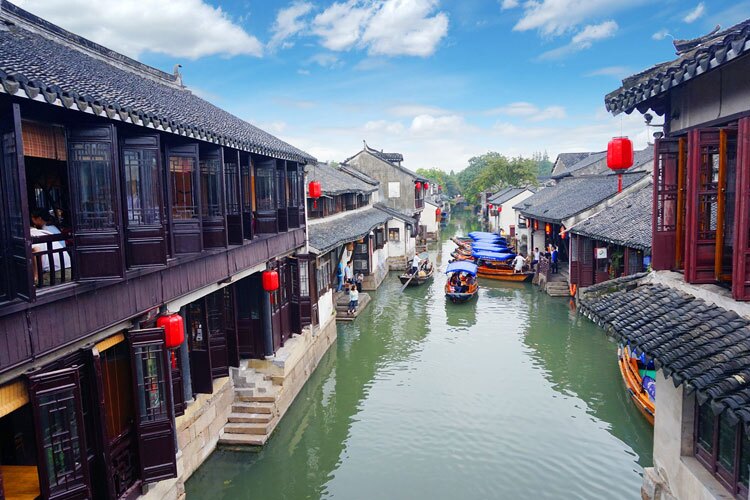 Zhouzhuang is noted for its typical Chinese water-town features, its well-preserved ancient residential houses, and a unique cultural landscape with a long history. Renowned as the No.1 Water Town in China, it is one of the "top ten tourist attractions in China favored by the European people".

Zhouzhuang is located in Kunshan, 38 km southeast of the city center of Suzhou.

Zhouzhuang is a place not to be missed if you want to admire authentic ancient Chinese buildings and immerse yourself in incredible watery views at the same time.

Unique landscape – There is no motorized traffic in Zhouzhuang – one either travel by gondola, by rickshaw, or by foot. You can take a gondola ride along the beautiful Zhouzhuang canals.

Distinctive local culture – The beauty of Zhouzhuang lies in both tangible and intangible assets. In addition to attractive landscapes, the town’s local culture such as Kunqu Opera, its original Xuan Juan folk theatre, tea culture, and annual events including the Fast-Boat Race and the Lantern Rowing Ceremony are also full of charm.

Top Things to Do in Zhouzhuang Water Town

Zhouzhuang is a typical Jiangnan water town with unique landscapes and cultural treasures. There are 6 highlights following we highly recommend you explore.

1. Have a Gondola Ride

Getting around in Zhouzhuang by gondola is an especially enchanting, out-of-the-ordinary experience that you should not miss! Part of the charm of a gondola tour is in passing under the rounded arches of the bridges. The reflection of an arch on the canal surface creates the illusion of a circle.

Surrounded and divided by rivers and lakes, Zhouzhuang has many stone bridges yielding extraordinary views.

The most touristy venue in the town, the Twin Bridges, refers to Shide Bridge (世德桥) and Yongan Bridge (永安桥) at the center. Built during the Ming dynasty, the Twin Bridges look like an old-style Chinese key, and are thus also known as the key bridges.

Standing on the southeast side of Fu'an Bridge, Shen House was built in 1742 by the descendant of Shen Wansan, the first tycoon of Jiangnan ("South of the Yangtze River") in the early Ming Dynasty.

Shen House comprises a compound of connecting courtyards, each surrounded by dwelling quarters, slightly reminiscent of Siheyuan in Beijing. Visitors can pass through 7 rings and 5 gates, as well as through winding corridors full of confusing twists and turns, to reach the compound's deepest courtyard.

Covering an area of more than 2,000 km² (half an acre), Shen House consists of over 100 rooms divided into three sections, each connected by arcades and aisles.

The house, spanning some 1,800 km² including the Yuyan ("Jade Swallow") Hall, is a residential complex consisting of more than 70 rooms, with a courtyard that of course contains a pool.

Water is an integral theme of Zhang House, with a river flowing under the arches of Yuyan Hall, permitting smaller boats to pass under the hall and into the courtyard, where they could anchor on the "shores" of a square pool in the center of the courtyard.

Yuyan Hall is spacious and bright, with elegant columns that rest on large bases, as was typical of the best of the Ming period architecture.

Once called De's Tavern, Milou Tower is located next to Zhenfeng Bridge, at the southwest corner of Zhouzhuang. It was well-known for being a rallying place for artists, writers, and other revolutionary types of the region.

The "Collected Works of Milou Tower" contains over 100 poems composed by members of Nanshe (南社, "The South Society"), a literary society of the late Qing Dynasty/early Republic of China era, whose leader was Chen Qubing (1874–1933).

Chengxu Taoist Temple is on Zhongshi Street, just opposite Puqing Bridge, which is situated between Zhenfeng Bridge and Taiping ("Peace") Bridge.

The temple was originally built between 1086 and 1093 AD during the Song dynasty. The temple has since seen several renovations and expansions, so today, Chengxu Taoist Temple stands as one of the largest and most famous Taoist temples in the region.

The temple spans an area of some 1,500 km² (1,800 square yards). Its simple but majestic halls include Sanctity Hall (Shengtang) and Doumu (Goddess Mother of the Big Dipper constellation, a reference to Taoist cosmology) Hall, while its pavilions include Yuhuang and Wenchang.

All of these structures are recognized as exemplary masterpieces of Taoist architecture.

How to Get to Zhouzhuang from Shanghai and Suzhou

See below for directions from Shanghai, Suzhou, Kunshan, or Qingpu to Zhouzhuang:

You can take a bus or a train from Shanghai to Suzhou, then take one of the Suzhou–Zhouzhuang options listed above. The Shanghai–Suzhou options are:

Note that there are air-conditioned (A/C) buses from Shanghai Hongqiao Airport (SHA) to Suzhou as in 2 below.

Local Transportation
You can take a taxi or rent a tricycle to get from Zhouzhuang Bus Station to Zhouzhuang Old Town:

With China Travel: This will solve your problems, like not knowing Chinese, finding the bus or train station, going to the wrong station or town, and waiting. Our English-speaking guide and experienced driver will make your trip easy and fun, and serve your party only.

We pick you up at the place you tell us (hotel, cruise terminal, airport or train station) and guide you in Zhouzhuang, and then transfer you to the place you want to go:

The scenery is suitable for a visit all year round. Note that Zhouzhuang is a very popular and crowded place. There might be fewer people on weekdays and always avoid Chinese public holidays like National Day or Labor Day.

In fact, we recommend either Zhengutang Hotel or Zhenfengrenjia Guesthouse, since they are both located centrally, meaning you can spend more time exploring the heart – and soul – of Zhouzhuang.

In addition, there are numerous private dwellings and rooms for rent in Zhouzhuang at more modest prices. They tend to be simple, but clean, and most certainly fulfill the requirement of "a place to crash out" should you decide on the spur of the moment that you would like to spend more time in Zhouzhuang.

Food to Eat in Zhouzhuang

Zhouzhuang has a long tea-drinking history, but the townspeople like their pastries as well as their more substantial dishes, such as those made with pork, traditionally the most popular meat in China. Two typical dishes are: “Wansan Pork Shank” and “Wansan Pastry”.

1. After having checked in at your preferred lodging, stroll/rickshaw about town to get your bearings, and take note of the layout of the town.

2. After your evening meal and after dark, go to the nearest canal and rent yourself a gondola for a nighttime canal tour of the town. If you tell the gondolier the name of your hotel, you can be dropped off at the nearest point when you return.

Day 2 (the bulk of the Ancient Town Tour):

1. Get off to an early start from the famous Twin Bridges, before moving on to Shen House, and then stroll/rickshaw down to the bridge below Shen House and cross westward to visit "Blessed" (Quanfu) Temple. Visit the Former Residence of Ye Chucang, then proceed across Fu’an Bridge and head for Shenting ("Shen House") Restaurant.

2. After a fortifying lunch, you are off to Zhang House, then cross the Twin Bridges in reverse and cross the bridge leading to the islet where Milou Tower is situated.

3. Thereafter you can visit Chengxu Taoist Temple, and if you have any steam left, you can make your way to Zhouzhuang Museum, where you can learn a lot more about what you have just seen

4. An alternative to the rather hectic second day of the above itinerary is to take in one or two of the less-frequented attractions on the first day while strolling about town to get your bearings. What you choose to visit on the first ½-day will probably depend on where you plan to stay for the night.

You may get confused about which water town is the best to go to if you are the first time to visit, so we list all the water towns with detailed information for your inspiration: