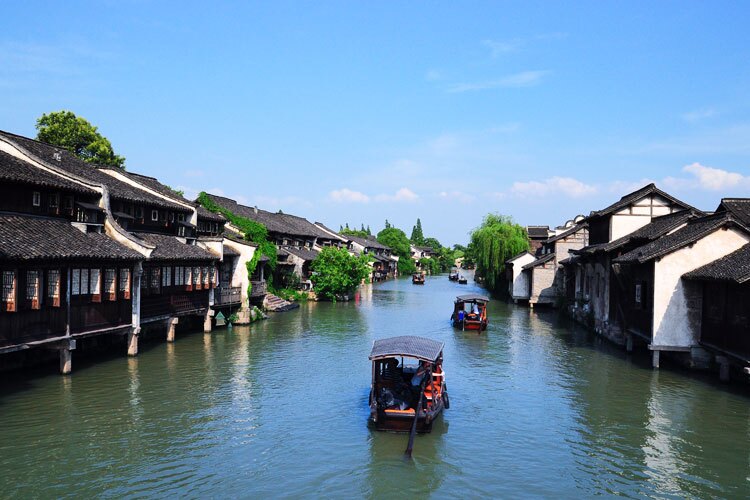 Water towns are ancient and historic towns in China known for their bridges, rivers, and canals. They are generally concentrated in the Shanghai area. Among a great many ancient water towns, these 10 are the most famous.

1. Tongli: Venice of the East

Built in the Song Dynasty (960–1279), Tongli Water Town is one of the six famous ancient towns south of the Yangtze River along with Zhouzhuang, Tongli, Luzhi, Xitang, and Wuzhen. It is situated on the outskirts of Suzhou, Jiangsu Province and a day trip to Tongli from Shanghai is possible.

The dense canals divide the town into seven parts, it has been given the nickname "Venice of the East". Most of the buildings in Tongli are situated along the canals, which keep a series of ancient structures from the Song, Yuan, Ming, and Qing dynasties.

Nanxun is a charming ancient town featuring a bunch of canals, bridges, and well-preserved ancient buildings. Different from other ancient towns in the area, the buildings here are a combination of traditional Chinese and Western elements.

Nanxun Ancient Town is not well-known as the other water towns like Zhouzhuang and Wuzhen. It is the most original and the least commercial water town near Shanghai. You will not see enormous crowds of travelers here.

With a history of 1,700 years, Zhujiajiao is an ancient town located in the Qingpu District of Shanghai. It has good access to Shanghai downtown by metro, bus, and taxi. So it's a popular family destination for the weekend.

Zhujiajiao is one of the best-preserved water towns in Shanghai. There are unique old bridges, and small rivers, along with restaurants, bars, and coffee shops lining both sides of the streets. In this town, you can take a stroll to see the ancient houses, sample some local foods, have a gondola ride on the canal, or just relax in a bar.

Xitang is a beautiful ancient town in Jiashan County of Zhejiang Province. Its history dates back to the Spring and Autumn period (770 BC-476 BC) 2,000 years ago. The scenery here is just like a painting and the photos you take will all be like paintings, no matter which way your camera points.

The covered waterside walkways are probably the most well-known scene in this town, which is also the most distinctive feature compared with other water towns.

5. Zhouzhuang: the Most Popular Water Town

Located on the outskirts of Suzhou, Zhouzhuang is the most popular and busiest water town in China. It is famous for its well-preserved ancient residential houses and elegant watery views.

Famous tourist attractions include the Shen House and Zhang House. And don't miss out on a boat trip around the town.

Wuzhen is a charming and elegant ancient town, as well as one of the six famous water towns in the Yangtze River Delta. It is divided into two parts by a river: the East Area and the West Area.

Wuzhen Water Town boasts more than six thousand years of history and has always been a fertile and rich town. It preserves the ancient appearance well and authentic ancient elements can be easily found.

7. Luzhi: a Beautiful and Quiet Town

Luzhi is a well-preserved and beautiful ancient town that has a history of more than 2,000 years. It is a small but lively town full of a cultural atmosphere. Walk along the streets, you can enjoy the natural beauty of the town and capture rural life by the riverside.

8. Mudu: the Birthplace of Wuyue Cultural

Mudu is an ancient cultural water town quite similar to any water town in Suzhou. It is also the birthplace of Wuyue culture, which is a distinctive regional culture and an organic part of Chinese culture. The main attractions in this town include the Qianlong Emperor's travel palace "Hong yin Resort", Yan's Garden, and Mudu Imperial Dock.

9. Fengjing: an Ancient Town Near Shanghai

Located in the southwest of Shanghai, Fengjing is a typical water town dating back to the time of the Yuan Dynasty (1271-1368). It is one of the eight new views of Shanghai.

In the town, you will see many historic buildings of the Ming and Qing style and numerous ancient stone bridges. This town is also famous for Jinshan Peasants' Painting, which has a great influence at home and abroad due to its unique art style.

Jinxi Water Town is located southwest of Kunshan City, Jiangsu Province. It is a lovely ancient town away from the tourist crowds and a nice place to walk around and sink into the old times of China.

With a history of more than 1,000 years, Jinxi Water Town features a lot of historical sites and traditional buildings that were built in the Ming (1836-1644) and Qing (1644-1912) dynasties. Jinxi is also known as the "Hometown of Chinese Folk Museum". There are 14 museums where you can feast your eyes on collections from ancient times.

How to Decide Which One to Visit?

Each water town has more than 5 historical sites worth visiting. Not all are included in the tour prices; you would need to pay an extra entrance fee for some Though some water towns such as Zhujiajiao are admission-free, it costs extra for the sites in the town.

Note: The above information is for your reference only.

Travel from Shanghai with Us

No subway or high-speed train is going directly to the water towns. Feel free to contact us to book a private tour, including a vehicle and an English-speaking guide, for easy access and in-depth understanding.