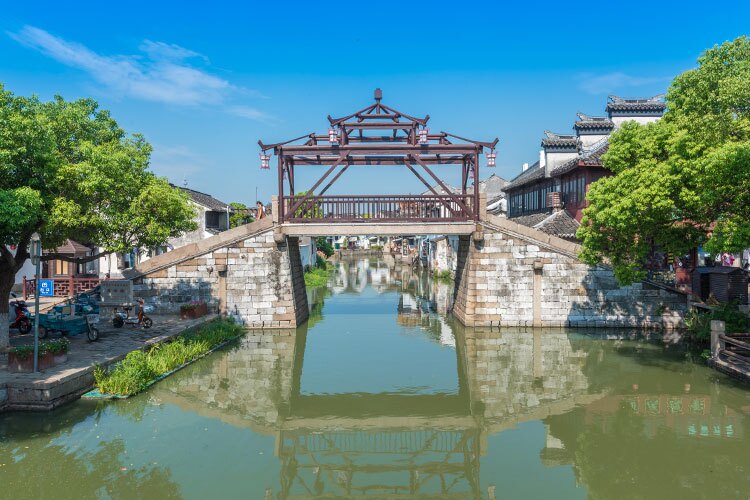 Tongli is a small but elegant water town close to Suzhou. It is renowned for gondola rides, beautiful water, Gardens, ancient stone bridges. It is one of the six famous ancient towns in Shanghai.

It is a hint of old China. Visitors usually take one or two days to relax in the laid-back atmosphere. A mix of traders and locals are still living and working there. It is less commercialized and crowded than some other famous water towns.

If you like a small but graceful water town, Tongli Water Town is the best choice. Most of the buildings in Tongli are situated along the waterways. Walking in the laid-back town, it's not difficult to imagine how life was 100 years ago.

Top Things to Do in Tongli

There are 8 activities you could have a try in Tongli to get the authentic charm of this famous water town.

1. Have a Gondola Ride

Never miss taking a gondola in Tongli Water Town. It is the best experience. The boat time is about 20 minutes. Water is the major way of transport in Tongli.

Tuisi Garden, also known as ‘Retreat and Reflection Garden’ (‘Retreat Garden’ for short), can be favorably compared to the famous gardens of nearby Suzhou. It was built in 1885–1887 during the Qing Dynasty.

This garden has two parts:

The western section is a private dwelling, consisting of an inner and an outer house, which in turn comprises a reception hall, a tea hall, and a sedan hall.

The eastern section is the more public area of the garden, including ponds with boats, bridges that span the narrower parts of the pool, waterside pavilions (the most famous of which is Water Fragrance Pavilion), verandas, rockeries, and tree-lined walkways.

In season, the garden is alive with flowers. A scholar garden was a place not only for contemplation, but it was also a place where friends – fellow officials, writers, artists, and intellectuals – met to discuss high and low subjects. One often drank copiously and generally had a good time.

All in all, ’Retreat Garden’ is a place of beauty and charm. Little surprise, it has been recognized, together with other classical Suzhou gardens, as a UNESCO World Heritage Site in 2001.

There are 49 stone bridges, of a variety of styles, joining 7 islands created by 15 rivers and 5 lakes. Each bridge has a poetic name.

The most unique thing about Tongli is that it is built across a wide stretch at the confluence of three rivers, where there are several small islands, all of which are interlinked, and stone arch bridges link the part of the city on the river banks. Because the bridges cross three rivers, they are called Three Bridges: Peace and Tranquility (Taiping) Bridge, Lucky (Jili) Bridge, and Lasting Celebration (Changqing) Bridge.

The Three Bridges are lucky symbols in the eyes of the residents, who believe that walking over them on weddings or birthdays brings good luck.

Many narrow and long lanes can be found in Tongli. There are eight major streets in Tongli Ancient Town, some are partially hidden by trees and some are situated by the river.

It was built in 1922, during the early years of the Republic of China (1912-1949), but it was built in the Ming Dynasty style. Jiayin Mansion faces Chongben Mansion across a waterway. It was built as the residence of a local scholar by the name of Liu Yazi (1887-1958).

Jiayin Mansion is characterized by high, white outer walls and inner walls clad with wood paneling and exquisite carvings. Above the main doorway is a section of roof with upturned eaves, reminiscent of the style of the Huizhou architecture. A handsome but unimposing garden forms the center of the mansion complex.

Chongben Hall was constructed by a wealthy Tongli merchant (Chong Ben) in 1912, has four courtyards and numerous buildings made of a combination of brick, stone, and wood.

The hall's interior is adorned by wood paneling with carved scenes from classic Chinese literature, including images of cranes and vases, both considered auspicious, the latter because the word for "vase" in Chinese is the same as the word for "peace". (Many Chinese words and numbers are considered lucky because they are homonyms of other words such as luck, wealth, long life.)

A special feature of Chongben Hall is that each row of buildings is situated at a slightly higher elevation than the preceding row of buildings (i.e. the rows are "stepped"), which was the owner's way of expressing the hope, if not the conviction, that each generation of the Chong family would attain greater success than the previous.

It was built during the Ming Dynasty. The enormous complex, including living quarters and gardens, was built by a Ming Dynasty official, Zhu Xiang, who styled himself Jungle. Gentle Hall comprises 52 houses, distributed among 5 courtyards.

The hall naturally contains a pond, a lotus pool, and a rockery made of grotesquely shaped (eroded into strange shapes) stones from the bottom of nearby Lake Tai. Bridges span corners and elongated stretches of the pool. Trees and buildings are strategically placed to conceal the complete dimensions of the garden, a factor that gives the illusion of a much larger garden. A 400-year old pine tree also can be found in the garden.

Gentle Hall has survived the rise and fall of several Ming and Qing Dynasty emperors.

The old town is famous for its distinctive local snacks. There are food stalls selling a variety of local flavors in the streets.

You can stay at Suzhou city or Tongli Water Town. Most hotels in Tongli are well-equipped with modern facilities like a western-style toilet, wi-fi, phone, and television. Some high-end hotels usually cost about RMB 1,000 per room per night.

China Travel staff have tried out some hotels in Tongli. The hotels that cost under RMB 350 are not comfortable or clean enough.

How to Get to Tongli

Tongli is close both to Shanghai and Suzhou. A day trip is possible from the above two cities.

Take a train to Suzhou first and then to Tongli. Below are some cities’ travel hours to Suzhou:

From Suzhou: 100 RMB and 45 minutes one way. But when you want to get back, it is not easy to find a taxi, unless you book one in advance.

How to Get to Tongli from Shanghai and Suzhou

3. There are shuttle buses from the square in front of Suzhou Railway station to Tongli that are available during 6 am – 6 pm, for 8 RMB.
4. The tourist buses leave the Bus Passenger Terminal in Wuzhong District of Suzhou for Tongli every half an hour from 7:40 am to 6:10 pm. The 40-minute journey takes 8 RMB.

With China Travel: This will solve your problems, like not knowing Chinese, finding the bus or train station, going to the wrong station or town, and waiting. Our English-speaking guide and experienced driver will make your trip easy and fun, and serve your party only.

We pick you up at the place you tell us (hotel, cruise terminal, airport, or train station) and guide you in Tongli, and then transfer you to the place you want to go:

The scenery is suitable for a visit all year round. It is less commercialized and crowded than some other famous water towns. But avoid Chinese public holidays like National Day and Labor Day.

How to Plan Your Tongli Tour