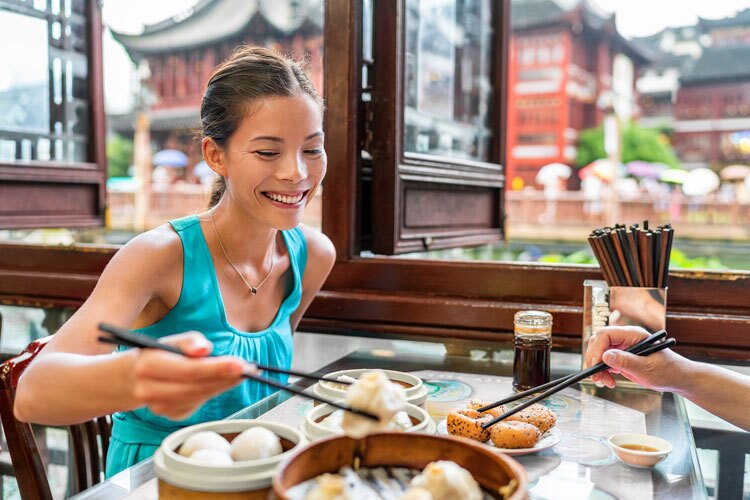 A thick and rich sauce is what defines Shanghai food. The sauce is made primarily from soy sauce, rice wine, and sugar.

The marriage of these flavors results in a savory taste that you'll yearn for. Most would think that the mixture would turn out sweet, but the rice wine and vinegar manage to neutralize the sauce's sweet properties.

Xiao Long Bao (小笼包), it's also known as Shanghai soup dumplings. It is filled with hot soup and pork, bamboo shoots, shelled shrimp, or crab meat, according to seasons.

Traditionally 10 soup dumplings are steamed in one xiaolong, a kind of small bamboo steaming basket, hence the name. Xiao Long Bao is often served with black vinegar or shredded ginger.

Where to Get Xiaolongbao?

Where to Get Smoked Fish in Shanghai?

Shen Jian Bao (生煎包), or pan-fried dumplings, is a traditional Shanghainese food that originated in the 1920s.

Topped with sesame and scallions, it looks golden and has a crunchy bottom, and juicy stuffing. Locals prefer to eat Shengjian accompanied by a bowl of hot beef noodle soup taken from the pan. The fillings of Shengjian include minced pork, shrimp, beef, and chicken.

Where to Get Sheng Jian Bao?

Braised Pork Belly, or Hong Shao Rou (红烧肉), is a popular Chinese dish. Using fat and lean pork belly as the main ingredients, it takes at least 90 minutes to stew the meat. The delicacy looks red and tastes salty, very fluffy, and soft.

Braised Pork Belly is also called Dongpo Pork. Legend has it that a prestigious Chinese poet in the 11th century, Su Dongpo, came up with a new way to cook pork, which made the meat tasty and fragrant.

The popularity of new dish was quickly spread and became famous throughout the country.

Where to Get Shanghainese Braised Pork Belly?

Hairy crab, or Chinese Mitten Crab, is widely used in Shanghai cuisine, especially in Sep. and Oct. when the crabs are of their best quality. Chinese traditional medicine believes that the meat from the female crab roe has a "yin" or cooling effect on the human body.

So it would be better to steam the hairy crab with fresh ginger and yellow rice wine to dispel coldness and remove the fishy smell of crabs.

Where to Get Steamed Hairy Crab in Shanghai?

Where to Get Shanghainese Breakfast?

Shanghai's "Four Icon Breakfast Foods (四大金刚)" can be found at any stalls around old neighborhoods like Tilanqiao (提篮桥). They are local, cheap, and easy to get to, presenting the most authentic glimpse of Shanghai life.

Check out more about Shanghai breakfast and eateries.

Where to Get Scallion Oil Noodles?

Nian Gao, or Chinese New Year cake, is popular throughout China. But it has various flavors in different regions areas. The Shanghainese way is to stir-fry sliced Niangao with pork ribs in red sauce.

The sauce is made by combining soy sauce, bean paste, rice wine, sugar, and spices; including five-spice, black cardamom, fennel seeds, cassia, and star anise. The delicacy tastes a little sticky, and a bit sweet and spicy.

Where to Get Shanghai-style Niangao?

Sautéed Shelled Shrimp, or Crystal Shrimp, originated from Guangdong Cuisine. It was once rated as "Shanghai's top 1 traditional cuisine".

The main ingredients are shelled shrimps and eggs with very simple seasonings.  So the shrimp meat is crystal bright, soft, and crunchy, with a fragrant smell.

Where to Get Local Crystal Shrimp?

Every city has its own special snacks, while in Shanghai, there are 3 street foods you shouldn't miss:

Crab-Yellow Pastry, Xie Ke Huang (蟹壳黄), is a crispy pastry filled with sweet or salty stuffing. It gets its name because it looks like a crab shell in both shape and color.

Sticky Rice Balls, Gaotuan (糕团), is made of sticky rice flour and filled with sweet ingredients like red bean paste and brown sugar. Shanghainese adore them as their soft flavors and lucky meaning "continuous promotions at every step".

Scallion Oil Pancake, Congyou Bing (葱油饼), is simply made by frying a flat cake of 1cm-thin batter on both sides with scallion and oil on a stove. It tastes salty and smells good.

Where to Get Street Foods in Shanghai?