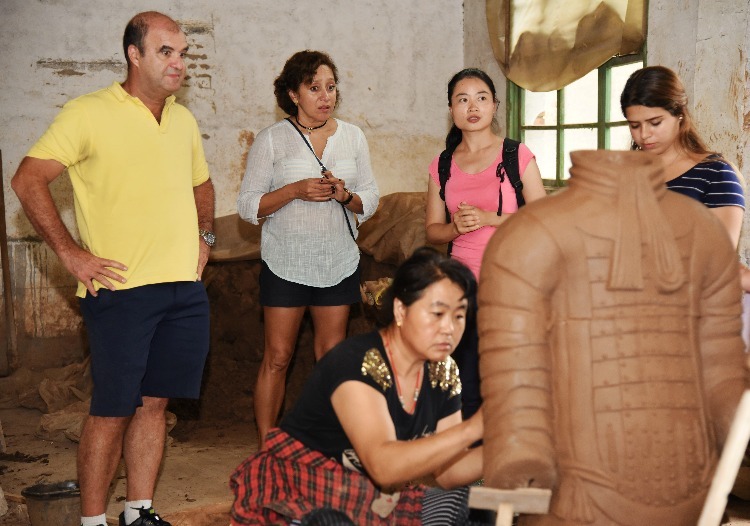 How the Terracotta Warriors Were Made

We know that the Xi’an Terracotta Warriors and Horses were built in the Qin Dynasty with a history of over 2,200 years.

Up to now, most of the terracotta statues are still maintained well, people are curious about what kinds of materials have such strong corrosion resistance?

It’s time to reveal the mystery of this grand underground terracotta army.

What Was Terracotta Army Made of – Three Row Materials

After the models dried in shape, the craftsmen covered a layer of mud on the surface and engraved it to create the hair, facial expression, and gestures of the terracotta warriors. The different craftsmen would make different faces.

The torsos of terracotta warriors were hollow, how to support those half tons of pottery figures was a great task. The experienced craftsmen got the idea of using the bran skin stuffed in the interior to make it solid.

The studies revealed that the terracotta army was made partly of torso, arms, legs, and head separately and then assembled.

The body and arms of warriors are hollow, but the legs and feet are solid, which indicated that the craftsmen make the torso from the pedestal to the collar.

After engraving details of clothing, armor, and facial expression, install the head and assembled it into the life-sized warriors.

The mold of statues dried in the shade and fired in the kiln. And then painted to complete the production of terracotta warriors.

it is normal that no two figurines are alike, because different artists would make different faces and decorations.

According to the analysis of the painted colors on the pottery statues, the archaeologists found that these colors are all made of minerals. Red is made of cinnabar, lead, and ochre. Green is malachite, blue is azurite, purple is the synthesis of lead and azurite, Brown is limonite, white is lead white and Kaolinite, and black is amorphous carbon.

The production of pottery horses is more complicated. Separately make the leg, body, head, neck, and tail of the horse assembled and covered with a layer of mud.

The most difficult part was carving tendons, pleats, hair, and horse ornaments in detail. And then cover one more layer of mud and glazing.

Following Are the 6 Steps In Making a Terracotta Warrior

The clay can be found around the site. It was screened and ground to remove impurities, such as leaves, big stones, and rubbish.

Artisans used corresponding molds to make heads, torso, hands, arms, and legs. Straight arms, legs, and hands could be molded easily. Bent arms had to be made in separate pieces, dividing at the elbow.

All complete pieces would be attached together with mud.

The complete models were put in a kiln and calcined until they were hard. The model had small holes in some places, making sure flames could enter the model's body cavities. And the models were placed upside down when firing.

On the surface, terracotta warriors were rough and uneven after firing. Artisans would glaze them and paint them with different colors to make them brighter and more natural.