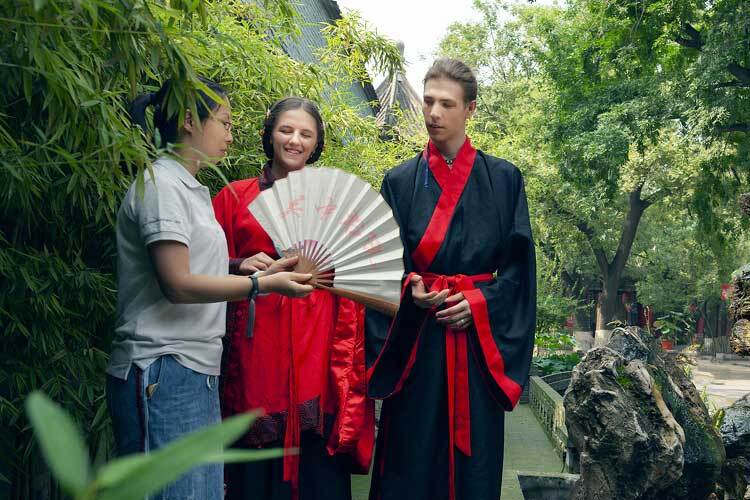 There are mainly three kinds of etiquettes in China.

The most common situations for presenting a gift are at festivals, weddings, birthdays. It is also appropriate to express gratitude, for sending off relatives and friends, and to return a favor. The most important thing in presenting a gift is to show intention.

As the saying goes, a goose feather sent from thousands of miles away is a present little in size but rich in meaning. One should choose and purchase a gift according to his own economic conditions. In this way, the gift receiver will accept the gift with ease of mind if he knows the real situation he is in.

Attention should be paid to this point. When presenting a gift, one should wrap it with exquisite wrapping paper. This not only shows there has been much thought entered into the gift but also raises the curiosity of the gift recipient.

Etiquette of Visiting a Sick Person

The Hospital is a special site for healing the wounded and rescuing the dying. Therefore, before going to a hospital, one should have a clear understanding of the ward the sick person is in and the bed number so that you do not make inquiries at all places and hence disturb the composure of the hospital. Before visiting a sick person, it is best to prepare a gift.

Nothing is happier than two lovers getting married in life. Getting married is one of the great joyous events in life. As a friend who takes part in the wedding reception, you should choose and purchase a gift in advance.

It is best that the gift has some meaning. For example, sending ninety-nine roses stands for "everlasting", or sending a golden congratulation card or memorial value and a wedding cake to express your gratitude and good wishes.

In the case of congratulations on an elder's birthday, apart from being particular about clothing, you must bring a gift which contains the meaning of health and longevity, such as an exquisitely designed cake or a memorial gold congratulation card.

Funeral and Interment Etiquette： The traditional funeral has heavy and complicated rites and trivial procedures. Now a memorial service is generally held to show condolences for the dead. Attention should be paid to some etiquette when taking part in a memorial service. In order to honor the memory of the dead and show concern and sympathy for his family members, you should present a wreath or face cards.

Etiquette of Sending Flowers in China

Knowing the Meaning of Flowers

Sending flowers is a branch of knowledge and also an art. The language expressed by flowers is indeed very rich. Have you ever grasped the profound meaning of the flowers you have received? When you are about to send flowers, will you feel a bit perplexed? Do you know the meaning of the bouquet composed of red and white roses? Do you know that you should deal with lilies before you send them to a sick? Only by expressing and comprehending the meaning of sending flowers well, can you express this art better.

In order to grasp the true meaning of floriculture, first of all, you should acquaint yourself with the language and meanings of flowers, thereby helping flowers exhibit the essence of the bright moon, assemble the wit of heaven and earth, and have the beauty of being natural and content. Through long-term evolution, people endow all sorts of flowers with certain morals to indicate affection and express emotions.

For example, passing an imperial examination is reputed as "reaping laurels" and sending-off or parting is reputed as "picking up a willow". A peach is offered to an elder to express good wishes for a good life on his birthday. Pomegranate is presented to newly married couples to express good wishes for more sons. As for "pine, cypress, bamboo, chrysanthemum, and lotus", they have their own specific and fixed connotations according to their characters.

Flowers of all shapes relate thousands upon thousands of words. To get acquainted with the meanings of flowers, you may start from the common sense of sending flowers.

Because of different national customs, there are also taboos on sending flowers. You can not copy others mechanically. Every flower has a certain meaning and contains a silent language.

Therefore, you should choose different flowers according to the receiver's conditions when sending flowers. When congratulating an elder on his birthday, you ought to send jonquil or Chinese evergreen. Jonquil symbolizes "health and long life" and Chinese evergreen represents "never growing old".

When men and women are in love with each other, men generally send roses and lilies to women they love. Being beautiful, elegant, pure, fragrant, these flowers are the pledge and symbol of love.

When congratulating on a friend's birthday, you ought to send Chinese roses, read palms, goldenrod, and Baby's-breath. These flowers symbolize splendid prospects during the best years of life.

When congratulating a newly married couple, you should send roses, lilies, tulips, common Freesia, African chrysanthemum, red palms, and Bird of Paradise flowers, etc. As for the wedding bouquet, adding several branches of Baby's-breath appropriately will make the bouquet florid and refined.

When paying visits to relatives and friends during festivals, you should send lucky grass, lilies, tulips, which symbolize "happiness and luck".

Couples may send lilies to each other, as lilies signify the happy union lasting one hundred years, being after each other's heart, and being together always.

When sending a friend off, it is appropriate to send sword lilies and red palms, which have the meaning of a pleasant trip and splendid prospects.

There are many taboos on sending flowers to a sick person. When visiting a sick person, you should never send a potted flower in case it will be mistaken for an incompletely cured illness after being ill for a long time.

Sharply scented flowers do harm to the sick who has received an operation as they tend to cause coughing; flowers with too flashy colors will jar the nerves of the sick and stimulate a feeling of annoyance.

It is appropriate to send orchids, narcissus, Callas, lilies and sword lilies, etc. You may also choose flowers that the sick person has a preference for at ordinary times. In this way, flowers will contribute to peace of mind and the sick person will get well as quickly as possible.

When paying a formal visit to an old venerable man, it is appropriate to send orchids as it has a noble quality and also enjoys a good reputation as "the gentleman of flowers".

When a new store is opened and a company starts a business, it is proper to send Chinese roses, read palms, yellow chrysanthemums, and Bird of Paradise flowers, etc, as these flowers flower over a long period and have exuberant flowers, which means "prosperity and exuberant wealth".

It is namely the first day of the first month of the Gregorian calendar every year. It is also called New Year's day but different from the Spring Festival. Spring festival is the traditional festival of China while Yuandan is the "New Year's day" that the whole world celebrates together.

Spring Festival (Chinese New Year) falls on the first day of the first lunar month of every year. It stands for a fresh start and new hope. It is the grandest and most magnificent festival in Chinese folk tradition.

When paying visits to relatives and friends during the Spring Festival, you may prepare a small gift. The Chinese people usually send food that contains the meaning of luck. If you are away from home and not convenient to send food, you may send a bunch of flowers or a gift instead to offer congratulations.

Lantern Festival is namely the fifteenth day of the first lunar month. On that day, people usually appreciate festive lanterns. Couples and lovers often say auspicious words such as "permanent reunion" and "never parting". In this way, they will receive the blessings of the god of the lantern.

It is half a month later than the vernal equinox of the lunar calendar of every year, generally April 5th or 6th of the Gregorian calendar. The Qingming Festival is the day for people to sweep tombs and burn incense to honor the memory of the dead. The Chinese people will offer flowers to the tombs, and get rid of weeds, and plant trees around the tombs as a memorial to the dead.

Dragon Boat Festival is namely the fifth day of the fifth lunar month. It is also called Duanyang Festival and Double Fifth Festival. It is held mainly to honor the memory of Qu Yuan and also to "ward off evil".

During the Duanwu Festival, if there are old people in the family, be sure to keep in mind that after rising up in the morning you should immediately begin paying respect to the elders, and sending them zongzi (glutinous rice dumpling wrapped in bamboo leaves) and noodles or a gift to wish them health and long life.

Mid-autumn Festival is namely the fifteenth day of the eighth lunar month of every year. It is the second-largest festival besides the spring festival in Chinese folk society. The Mid-autumn Festival is a day for a family reunion. The moon is extraordinarily bright on Mid-autumn day. On a moonlit night, the whole family gathers together to eat moon cakes and to express feelings after a long parting. What a comfortable and peaceful sight it is!

In real life, many people fail to go home for a family reunion on the Mid-autumn day for all kinds of reasons. This is indeed a pitiful thing. However, it is not an irreparable pity.

Since nowadays we have more advanced modern communications equipment, you can make a phone call to a friend thousands of miles away and offer blessings on the Mid-autumn night, or put your innermost feelings in the congratulation cards and send it to your families and friends in the distance several days in advance.

Taboos on Presenting a Gift in China

There is a prevalent saying in China that happy events come together. Hence, whenever an event of great rejoicing and congratulation occurs, the gifts will be all sent in even numbers, and accordingly, those sent in odd numbers should be avoided as taboo. However, Cantonese avoids the even number "four" as taboo, for "four" sounds like "death" in Cantonese, which is not appropriate. You can see another example here.

Though white has the meaning of purity and flawlessness, the Chinese people tend to abstain from it, because in China, white is often regarded as the color of great sorrow and poverty. Similarly, black is considered to be inappropriate. It is the color of calamity and grief and mourning.

However, red as the symbol of happy events, serenity, and festivity is regarded with great affection by the general public. Moreover, Chinese people often avoid sending bells to elderly people and pears to a couple or lovers, as in the Chinese language, "sending bells" have the same pronunciation as "attending upon a dying relative or burying a parent" and "pear" sounds the same as "leave", which is not auspicious. Nor are you allowed to send medicines to healthy people and undergarments to friends of the opposite sex.