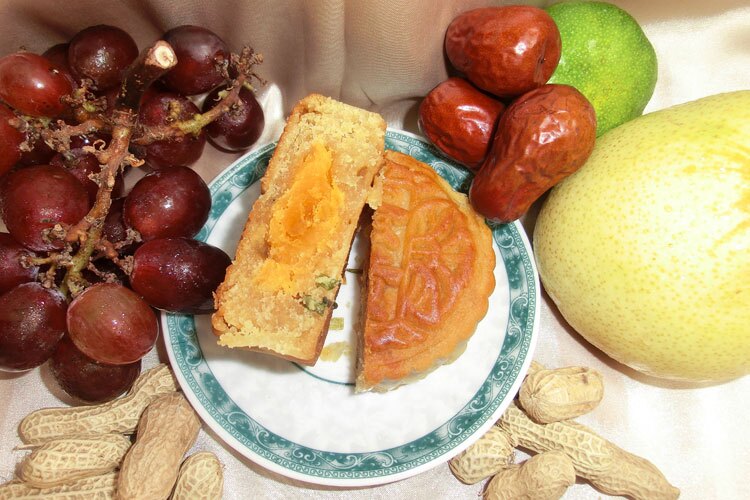 Mid-Autumn Festival is a very important traditional festival in China. There are lots of ways to celebrate this grand occasion, and food plays an essential role. What do Chinese people eat during the Mid-Autumn Festival? The moon cake is a must-eat food, but what else?

We've listed the top 12 popular Mid-Autumn Festival foods, along with some interesting stories behind them.

The moon cake is a must-eat food at the Mid-Autumn Festival. Shaped like the moon and stuffed with various ingredients like lotus seed paste or salted egg yolks, the moon cake is a round baked cake. It can come in different sizes.

The theme of the Mid-Autumn Festival is thanksgiving and reunion. Moon cake symbolizes the full moon and people's desires for happiness and family reunions.

On this day, Chinese people will try their best to go back home and enjoy a reunion feast with their families. Sharing the round moon cake among family members signifies the completeness and unity of families.

Giving a duck as a gift and eating duck is a traditional custom at the Mid-Autumn Festival. This custom came from a secret signal of an uprising in the Yuan dynasty (1271-1368).

Taste and texture depend on the way ducks are prepared, and that varies in different parts of China. Beijingers like crispy duck skin, Roasted Duck is a well-known dish. Jiangsu people love sweet-scented Osmanthus Duck; while people in Sichuan prefer the flavorful Smoke-Baked Duck.

The custom of eating Taro at the Mid-Autumn Festival dates back to the Qing Dynasty (1644–1912).

This versatile and nutritious vegetable can be eaten boiled, steamed, or baked, as a side dish or a dessert.

Pumpkin is very popular in the Jiangnan area, located in the south of the lower reaches of the Yangtze River, including major cities like Shanghai, Hangzhou, Suzhou, and Nanjing. People in those regions believe the custom of eating pumpkins at the Mid-Autumn Festival came from local folklore.

In ancient times, there was a poor couple and their daughter who lived in the South Mountain area (in Jiangxi Province today). They suffered years of crop failures. The parents were old, sick, and starving - the entire family was in dire straits.

On a day in Mid-Autumn, the daughter found a big pumpkin in the weeds. She took it home and cooked it for her parents.

After eating the pumpkin, the old couple got increasingly better and became strong. Consequently, people believe that eating pumpkins at the Mid-Autumn Festival brings health and longevity.

River snails are plentiful in southern China thanks to the warmer climate, tons of small rivers, and rice paddies. Its harvest season is in autumn, and the meat of the snails is extremely fat and tastes the best.

Osmanthus flowers are in full bloom in September and October. Chinese people like to use these sweet, fragrant flowers to make rice wine, flower tea, cakes, and a variety of other treats, including Osmanthus jelly and syrup.

On the night of the Mid-Autumn Festival, Osmanthus wine, Osmanthus sorbet, Osmanthus lotus roots, and Osmanthus sweet balls are served at the dining table, symbolizing elegance, wealth, sweetness, and reunion.

7. Hairy Crab - A Seasonal and Delicacy

In China, the crab harvest season is in September and October. Around this time of the year, the crabs are getting ready to lay their eggs, which makes them the tastiest.

Crabs have been the highlights of the Mid-Autumn feast since the late 14th century. Hairy Crabs from Tai Lake and Yangcheng Lake in Suzhou are considered to be the best crabs and are always in short supply during the Mid-Autumn Festival.

Pomegranate is usually ripe in September and October, it is also a seasonal fruit in autumn.

Pomegranates have many seeds inside. Chinese people believe the abundant seeds imply new life, eating pomegranates shows people's desire for babies. Traditionally, women eat pomegranates and admire the moon at the Mid-Autumn Festival, they expect the Moon Goddess would bless them pregnant with babies boy soon.

Chinese people worship and pray to the moon with all kinds of sacrifices on Mid-Autumn night, the Pomelo (a type of mandarin or tangerine) must be one of them.

"Pomelo (柚 yòu)" is a homophone for "bless (佑yòu)" in Chinese. People offer Pomelos to the moon in hopes that the Moon Goddess will bless their family with good luck and happiness.

Lotus roots have a crunchy texture with a sweet flavor. It can be deep-fried, stir-fried, or stuffed with meats in two slices as a hamburger.

11. Pear - Reunion and Never to Be Separated

"Pear (梨 lí)" is a homophone for "separate (离lí)" in Chinese. The Mid-Autumn Festival is a time for reunion. People believe that couples and families would never be separated after eating pears completely. But don't share a pear with others as sharing a pear means you will be separated.

With the sweet and juicy taste, pears would help cleanse the taste buds on the surface of your tongue after you have eaten a sweet moon cake.

Rice cake (Nian Gao) is a traditional food made from glutinous rice flour and is usually eaten during traditional Chinese festivals like the Mid-Autumn Festival or Spring Festival.

The main color of nian gao is yellow and white. In Chinese culture, yellow symbolizes gold and white symbolizes silver. So nian gao also symbolizes the God of Wealth. It is a lucky food showing people’s good wishes for a better life.