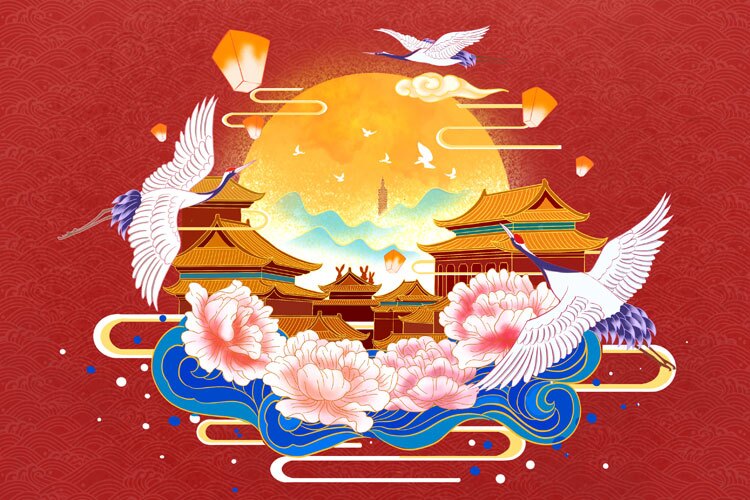 How to Celebrate the Mid-Autumn Festival

Traditions of the Mid-Autumn Festival focus on thanksgiving and reunion. The full moon symbolizes unity, which should resonate strongly in today's fast-paced world. The most common traditions are eating moon cakes and gazing at the moon. Besides, ethnic minorities across China have their own unique customs.

Here we've listed the top 11 traditions of the Mid-Autumn Festival so that you can slow life down to enjoy the festival during your tour in China. Do what Chinese people do, to explore the broad and profound Chinese culture!

Mid-Autumn Festival is a time for families reunion. During the festival, family members will try their best to go back home and get together with their parents, no matter how far from home. This tradition is much like Thanksgiving in the United States. People will share a fantastic meal together to enjoy this family reunion time.

Pumpkins, chestnuts, taro, persimmons, sweet potato, and walnuts usually feature in the festival feast, emphasizing the bounty of the fall harvest, along with traditional celebratory foods like crab, pork, and duck.

The full moon is the symbol of a family reunion, reminding people of their hometowns and loved ones.

Gazing at the moon is an ancient tradition dating back to the Zhou dynasty (around 500 BC) when people held ceremonies to welcome the full moon.

In modern times, after a family reunion dinner, some people choose to go outdoors to admire the full moon on the night of the Mid-Autumn Festival.

A good place to admire the moon should be wide and open, high, or somewhere with water. Parks, squares, or hills are recommended.

The Mid-Autumn Festival is also known as the Mooncake Festival. The cakes, typically round, symbolizing the full moon, are presented as gifts to relatives and friends.

The tradition of moon cakes can be traced back to the Southern Song dynasty (1127–1279 BC), even though, the moon cakes were not round at that time.

Chinese moon cakes are small baked cakes, made with a variety of fillings like salted duck eggs, lotus seeds paste, fruits, and sometimes even meat. A cup of Chinese tea or osmanthus-flavored wine along with moon cakes is a match made in heaven.

As early as August, moon cakes start to appear on the shelves of local bakeries, some of them are overpriced. Touring with China Travel, free moon cakes will be awaiting you!

4. Light and Hang up Lanterns

Hanging up lanterns is one of the interesting customs of the Mid-Autumn Festival. This activity is called 竖中秋 (shù zhōng qiū) in Chinese. It is said that the higher the lanterns are hung, the luckier the family will be.

The lantern is usually made from bamboo strips shaped like fruit and birds. Children are particularly fond of making their own traditional lanterns. When darkness falls, locals place candles inside the lanterns and hang them outside.

Every year, lantern carnivals and exhibitions are held in parks and other public places, during which lanterns of various colors, patterns, and styles are on display. The entire area is decorated with beautiful lighting.

Besides hanging up lanterns outsides, Chinese people usually write some interesting riddles on the lanterns and have other people try to guess the answers.

The history of guessing lantern riddles is over 1500 years. In ancient times, many single men and women looked to find the right person by guessing the riddles.

Nowadays, this activity is still popular with young people. Some Chinatown or Southeast Asian countries would hold lantern riddle contests on the Mid-Autumn night and the Lantern Festival (during Chinese New Year).

Many customs of the Mid-Autumn Festival are associated with the moon, so the festival is also called the Moon Festival.

In ancient times, Chinese people believed the moon governed all vital changes, especially the harvest of grain. Therefore, on the night of the Moon Festival, people will put a table outside under the moon. Then burn incense, put moon cakes and fruits as sacrifices on the table, face the moon, and pray for fortune.

There was another saying that the custom of moon worship was related to the goddess of the moon - Chang'e. Chinese people believed in rejuvenation being associated with the moon and women.

According to the legend of the Moon Festival, Chang'e ate the elixir to save ordinary people and flew to the moon. So, people worship the moon to memorialize here on the Mid-Autumn night.

In Chinese legend, the old man under the moon (月老 yuè lǎo), a kind of Chinese Cupid who is in charge of love and marriage, would tie a red thread between a couple who was fated to fall in love with each other on the Mid-Autumn Festival. With the help of the old man's red thread, the couple will have a good marriage and live happily forever.

In ancient times, unmarried boys, girls, and their parents would worship the moon and pray to the old man for a good marriage on the night of the Mid-Autumn Festival.

Nowadays, some people in south China still believe the moon would bless young couples. Married women who bathe in the moonlight and pray to the moon would be pregnant with a baby boy soon.

A team of dancers carries a long dragon on poles. By moving the poles, the dancers can make the dragon sway and weave. When dragon dances are held on the night of the Mid-Autumn Festival, the dragon's body is illuminated from within by lanterns or candles. In Hong Kong, the fire dragon dance is very popular.

9. Visit Relatives and Give Gifts

Besides gathering with family, people would also visit relatives who live nearby with gifts. In ancient times, people like to give moon cakes, fruits, and ducks to relatives as gifts at the Mid-Autumn Festival. This tradition is still practiced today.

Nowadays, the younger generation tends to celebrate it by sending WeChat red envelopes to their families and friends via intelligent mobile phones. There are over 1 billion digital red envelopes were sent over to the Mid-Autumn Festival in 2015.

In ancient times, ordinary people had to do manual labor in fields, they didn’t have enough money and time to buy things. During the Mid-Autumn Festival, when crops are ripe, people would go shopping and buy plenty of food and clothes to celebrate this harvest season.

In modern times, Chinese people are used to going shopping on holiday. Supermarkets and online shops would do special promotions to boost sales during the festival.

Combined with a weekend break, Chinese people usually have a 3-day holiday during the festival. People like to spend time with their family or go on a short trip.

In 2022, the Mid-Autumn Festival falls on September 10 (Saturday). The public holiday is from September 10 to 12, it is definitely a travel peak of the year.

Read the Top 8 Places to Celebrate Mid-Autumn Festival in China.

Though different areas have different customs to celebrating the Mid-Autumn Festival, people share the common desire for reunion, happiness, safety, health, and a good harvest.

The most unique custom of Hong Kong to celebrate the Mid-Autumn Festival is the "Tai Hang Fire Dragon" in Causeway Bay. There will be 300 people waving a 67-meter dragon through the streets of Tai Hang, complete with countless firecrackers and burning incense:

Performances and lantern display running from the Mid-Autumn Festival for the next week or so will also be held at Victoria Park and Tsim Sha Tsui (right next to the Star Ferry Terminal).

Many festive activities in Taiwan are related to food. The most special tradition is to eat pomelo and wear pomelo hats.

Pomelo, "You Zi 柚子" is a homophone for "佑子", which means "bless my son" in Chinese. The skin of the pomelo is peeled into a flower-shaped hat for children to get good luck and auspice.

In Pu city of Fujian, women should cross the Nanpu Bridge to pray for long life. In Jianning, people light lanterns to pray to the moon for their babies. In Shanghang County, children have to get down on their knees when they worship the moon.

Parents in Longyan, while eating a moon cake, will dig a small hole in the center of the cake, which means that some secrets should be kept from their children.

Lunar August is the best time to eat ripe taros. In the Chaoshan Area (southeast of Guangdong Province), women and children worship the moon. When night comes, they burn incense before a table bearing fresh fruit and taros as sacrifices.

People in Zhejiang and Jiangsu provinces also eat taros during the Mid-Autumn, because in local dialects, taro sounds like "good luck is coming" Chinese.

South of the Yangtze River Valley

In Nanjing, people do not just eat moon cakes, they also eat another famous dish called Yanshui Duck, or Osmanthus Duck. This dish is only cooked on Mid-Autumn Day, partly because it is cooked with osmanthus flowers, which blossom in August.

In Wuxi of Jiangsu Province, people like to burn joss sticks to celebrate the festival. The burned joss sticks are wrapped in tulle (lightweight, very fine netting) with beautiful paintings of the Moon Palace or Chang'e.

In Ji'an County of Jiangxi Province, local people fire pottery jars using straw and vinegar, so that the smell of the vinegar spreads all over the villages.

In Xincheng County, people celebrate the festival by lighting oil lamps from the 11th day to the 17th day of the 8th lunar month.

People prepare a lot of food like moon cakes, duck meat, glutinous rice cakes, and rice dumplings. In some places, people light orange lamps or ask children to run through the streets carrying pomelos in their hands, decorated with burning incense.

In Jiading, people worship the god of the land and perform some local dramas to celebrate the festival.

In the North of China

On Mid-Autumn Day, the people of Qingyun County in Shandong Province worship the god of the land, as well as their ancestors. In Lu'an of Shanxi province, parents invite their sons-in-law to have dinner with them.

In Xixiang county of Shanxi Province, men usually go boating or climb mountains together, while women stay at home and prepare dinner. In Luochuan County, parents send gifts to their children's teachers to express gratitude.