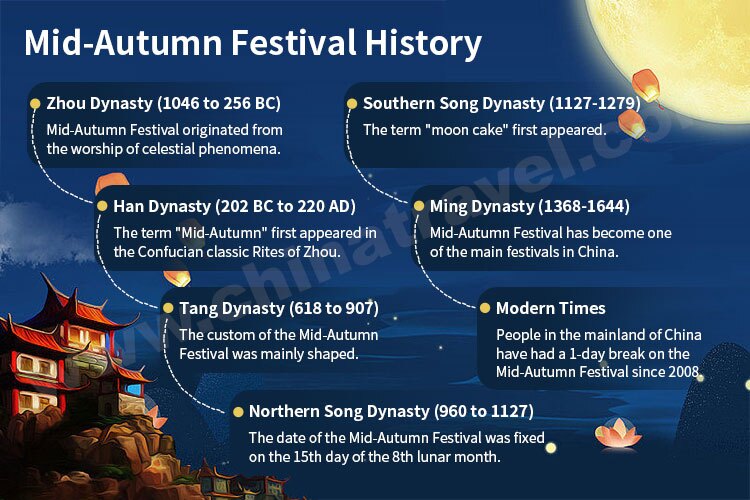 The Mid-Autumn Festival has a long history of over 3,000 years. It originated from the custom of worshipping the moon during the Zhou Dynasty (1046 - 256 BC).

The custom of the Moon Festival was mainly shaped in the Tang Dynasty (618 - 907). It became popular after the Song Dynasty (960 - 1279). Nowadays, it's the second most important festival in China.

Ancient Chinese emperors offered sacrifices to the moon in autumn to pray for a good harvest in the coming year. Later, nobles and officials followed it, and it gradually spread to the ordinary people.

The term "Mid-Autumn" first appeared in the Confucian classic Rites of Zhou (周礼), written in the Han Dynasty(202 BC – 220 AD). It is a book outlining the rituals of the Zhou Dynasty.

At that time, the word "Mid-Autumn" was only related to the time and season, but not the festival.

Tang Dynasty (618-907) is an important period for the Mid-Autumn Festival. The custom of it was mainly shaped in the Tang Dynasty.

The custom of admiring the moon at the Mid Autumn Festival was very popular at that time. Many poets wrote poems about it. People also combined the Moon festival with some legends like "Change over the Moon", making this festival full of romance.

In the Northern Song Dynasty (960-1127), the 15th day of the 8th lunar month was established as the Mid-Autumn Festival. It became a popular folk festival.

It is said that the custom of eating moon cakes at the Mid-Autumn Festival began in the Tang Dynasty. In the Northern Song Dynasty, it was popular in the palace and later spread to the people. It became a common food custom for all people during the Ming Dynasty.

Since the Ming Dynasty, moon cakes were only eaten at the Mid-Autumn Festival, which was the main offering of moon sacrifice popular among the people.

There were more activities to celebrate this festival, such as playing clay rabbit and the married daughter going home to see her parents.

Since 2008, Chinese in the mainland of China have had a 1-day break on the Mid-Autumn day. Combined with a weekend, people will have a 3-day holiday.

During the short break, people could enjoy a trip with families or friends, go back home, or watch the Mid-Autumn Festival Gala on TV.