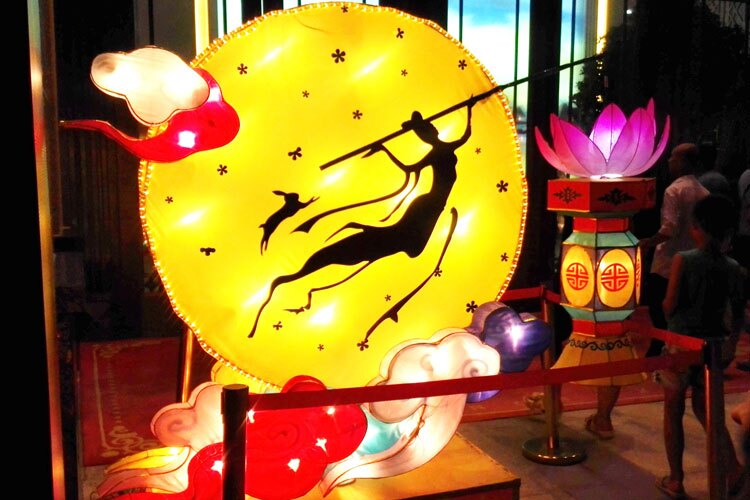 There are quite a few stories behind the Mid-Autumn Festival, the most popular one is the legend of the Chinese Moon Goddess - Chang E.

The legend reflects people's wishes and it changes depending on the social reality. You will read the most widely known story of Chang'e and other interesting legends of the Chinese Moon Festival.

In Chinese legend, Chang E is a pretty woman who has a kind heart. Hou Yi, the archer, is Chang E's husband. They live in the times when there were ten suns in the sky......

Affected by the extreme heat of the ten suns, all the crops are dried. People were dying. To protect the earth, Hou Yi used his bow and arrows to shot down nine suns, only leaving one shining in the sky.

As a reward, the Queen of Heaven gave Hou Yi an elixir of life for his great contribution. The person who eats the elixir will become immortal and go to heaven.

However, Hou Yi was unwilling to leave his wife, so he did not eat the elixir. Instead, he gave it to Chang'e for safekeeping.

Chang'e put the elixir of life into a case in her dressing table, but she was observed by one of Hou Yi's disciples, Peng Meng, who was very treacherous.

Chang E Flying to the Moon

One day, when Hou Yi went shooting with his disciples, Peng Meng pretended to be ill and didn't go with them.

Shortly after they left, Peng Meng broke into Hou Yi's house and forced Chang'e to hand over the elixir of life. Chang'e knew that she couldn't manage to protect the elixir and herself, so she fetched the elixir from the case and swallowed it immediately.

Suddenly, Chang'e floated lightly in the air and became immortal. She didn't want to live far away from her husband, so she flew to the moon which is the nearest to the earth.

Hou Yi was broken-hearted when he back home and was told what had happened to Chang'e.

Hou Yi shouted to the sky and surprisingly discovered the full moon was extremely bright that night. He caught sight of a swaying figure that was exactly like Chang'e.

He immediately made moon cakes which is Chang E's favorite food. Then, he put a table under the moon and placed the moon cakes with candles on the table, convening a memorable ceremony for Chang'e, who lived on the distant moon.

When local people heard the story of Chang'e, they offer moon cakes and fresh fruits to the moon for worshipping the Moon Goddess Chang'e.

Since then, worshipping the moon and eating moon cakes became a tradition of the Mid-Autumn Festival.

One day, the Jade Emperor wanted to test the virtue of animals. He sent three immortals from Heaven to the Earth.

The immortals disguised themselves as three poor old men. They begged for food from the animals. All animals tried their best to find food for these poor old men, except the rabbit.

The rabbit was too small to find food for them, and she had nothing to give them. Instead, the rabbit plunged into the raging fire and invited the old men to eat its meat. The three immortals were deeply moved. They decided to bring the rabbit to Heaven and kept company with Chang'e on the moon.

The rabbit on the moon is commonly known as the Jade Rabbit. She mashes herbs and makes elixirs of life day after day, keeping Chang'e company.

3. Wu Gang Chops the Tree - A Kind of Sisyphean Task

When you look up at the bright moon, you can see a black shadow, which is just the legendary Wu Gang, trying to cut down an osmanthus tree.

Wu Gang was an ordinary woodcutter who was obsessed with becoming immortal. He invited an immortal to be his teacher, seeking instructions from him.

However, Wu Gang was careless, impatient, and he couldn't concentrate. The immortal was angry with Wu Gang and made him stay on the moon, informing him that he could become immortal once he had cut down the moon's osmanthus tree.

Wu Gang tried to fell the tree with his ax. However, the tree would always re-grow naturally into its former state. Day by day, Wu Gang chops the tree, but he can't manage to fall it permanently.