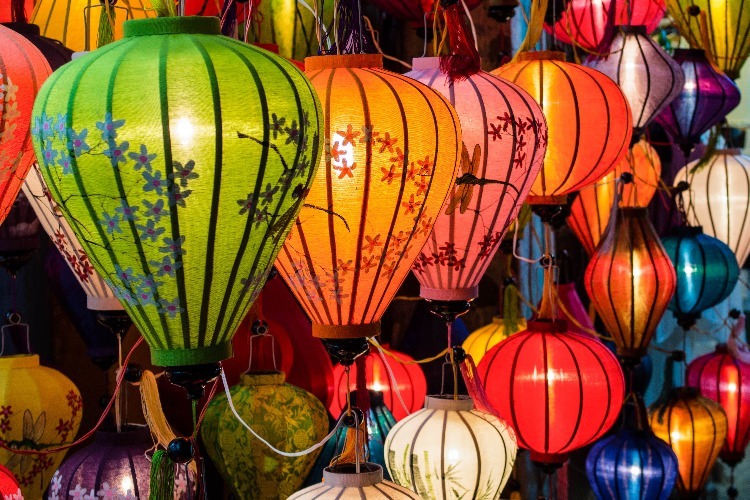 1. Gathering with Families and Playing with Children

Crops are usually ripe in the mid-autumn in Vietnam, parents are busy with harvesting and do not have much time to take care of their children. After harvesting, they will spend more time with their families and enjoy the joy of the harvest. Parents will play with their children and buy them toys and snacks as gifts on the evening of the Mid-Autumn Festival. It is definitely a carnival for children.

2. Worshiping the God of Earth

After harvesting in the mid-autumn, Vietnamese people will worship the God of the Earth to the god and pray for a bumper harvest for the next year.

To worship the god, people usually set a table in the yard on the night of the Mid-Autumn Festival. They will put various sacrificial offerings like moon cakes, fruits, and snacks. Sitting around the worshiping table, gazing at the full moon, and gathering with families, people express their gratitude to the God of Earth.

A legend says that a carp spirit killed many kids on the night of the Mid-Autumn Festival, so people didn’t allow children to go outside that night.

4. Listening to the Story of Cuội

Besides playing outside with carp-shaped lanterns, children in Vietnam will listen to the story of Cuội on the night of the Mid-Autumn Festival.

It is said that a man, called Cuội, had a magical tree. He could cure anyone by that tree, but he must water it with clean water every day. One day, Cuội accidentally watered the tree with dirty water, and the tree suddenly flew into the sky. Cuội grasped at the root of the tree at once and flew to the moon with the tree.

Parents believe that telling the story of Cuội to their children helps them make significant advances in their careers after growing up.

Want to know the Chinese version - Chang E over the moon? Read the Story of the Chinese Mid-Autumn Festival.

Performing lion dance is also a popular way to celebrate the festival in Vietnam. The team usually consists of both non-professional children's groups and trained professional groups.

They will perform on the streets, going to houses asking for permission to perform for the host. If accepted by the host, the "lion" will come in and put on a dance. People believe this is a blessing of luck and fortune for the home. In return, the host will give lucky money to show their gratitude.

The mooncake is also an essential element of the Mid-Autumn Festival in Vietnam.

There are two types of moon cakes in Vietnam. One is similar to Chinese moon cakes, having pastry skins and rich fillings stuffed inside but the shape is square.

The other type of mooncake is very simple. It is only made from rice flour, sugar, and water. Vietnamese people think this simple white moon cake symbolizes purity.