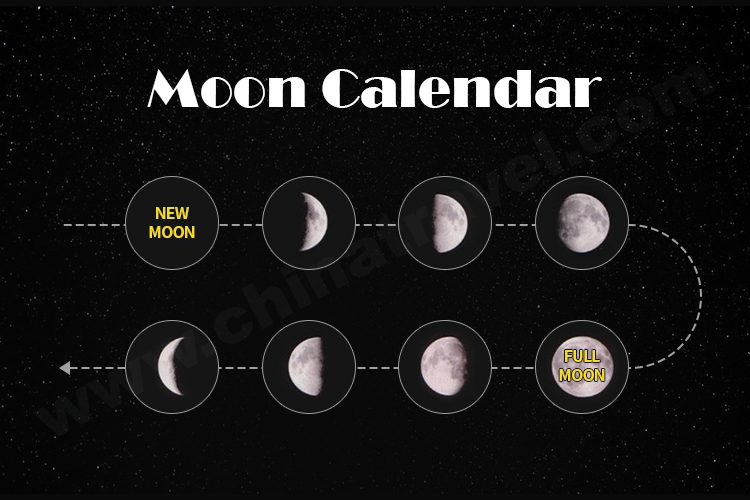 The moon phase (lunar phase) describes the different shapes of the moon we can see within one lunar month (about 29.5 days). The moon's phases gradually change as the Moon's orbital positions around Earth and Earth around the Sun shift.

The above dates are based on the Gregorian calendar, times are local time for Greenwich and are adjusted for DST when applicable.

What Are Moon Phases?

Half of the Moon’s surface is always illuminated by sunlight. As the Moon orbits Earth, it changes how much of the lit-up side we can see. There are totally eight phases of the moon: new moon, waxing crescent, first quarter, waxing gibbous, full moon, waning gibbous, last quarter, and waning crescent.

The New Moon starts a new lunar cycle. When the sun and moon are in conjunction and the moon is on the same side of Earth (Sun→Moon→Earth), the moon appears totally dark, it is called New Moon.

The new moon is usually invisible (except during the solar eclipse) because we are facing the Moon’s shadowed side. Occasionally, if the New Moon’s position lines up correctly between the sun and earth, from our viewpoint it will cover part or all of the sun’s disk, causing a solar eclipse.

The First Quarter usually appears 7 or 8 days later than the New Moon. During the First Quarter, the moon has traveled 1/4 of the way through its orbit and 1/2 of the moon is sunlit.

The Full Moon is the phase that the moon is fully illuminated from Earth's perspective. It appears when the earth is located between the sun and the moon (Sun→Earth→Moon).

Occasionally, if the Full Moon’s position lines up correctly with the sun and earth, from our viewpoint, the moon will enter Earth’s shadow, which will cut off part or all of the sunlight reflected off the moon’s surface, causing a lunar eclipse.

The Last Quarter usually appears 7 or 8 days later than the Full Moon. During the Last Quarter, the moon has traveled 3/4 of the way through its orbit and 1/2 of the moon is sunlit.