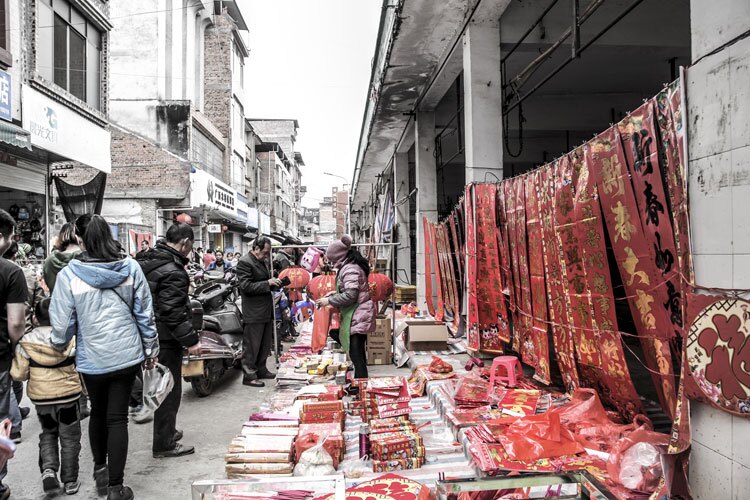 Chinese New Year, also known as the Lunar New Year or Spring Festival, is the most important traditional festival. Falling on the first day of the lunar calendar, the Chinese New Year has a history of over 4000 years.

Chinese New Year can be traced back to 4000 years ago. Since there was no written record in Ancient Times (before 2000 BC), the exact beginning year is still uncertain. Some people believe that the Chinese New Year is originated in Yushun Time (虞舜时代 yú shùn shí daì).

In Ancient Times, people believed astrology, they also thought ancestors and gods could control the fortune of people. So ancient people would go hunting and kill animals in winter, offer sacrifices to ancestors and gods at the beginning of the lunar year.

In Ancient Times, people didn't have the concept of "year". They usually celebrated "New Year" at the beginning of spring. In the Zhou Dynasty, the 11th lunar month was considered as the beginning of the year (called 岁首 suì shǒu or 正月 zhēng yuè in Chinese) according to the Chinese sexagenary cycle.

Though the main custom was still offering sacrifices to ancestors and gods, some people started to worship nature and bless harvests at the turn of the year.

In ancient times, the date of the Chinese New Year celebration varied from mid-winter to early spring. The date was fixed on the first of the first lunar month in the Han Dynasty. Besides offering sacrifices to ancestors and gods, some other celebrating activities appeared, such as burning bamboo and drinking Tusu wine (屠苏酒 tú sū jiǔ).

From the Song Dynasty, more celebrating activities appeared, such as setting off firecrackers, guessing lantern riddles, visiting relatives. People got a 7-day holiday during the festival. The customs were similar to those in modern times.

Chinese New Year was an important festival in the Qing Dynasty. The royal family would hold huge celebrations and grand banquets. It was very extravagant.

During the Beiyang government period (1912-1928), President Yuan Shikai decreed that the Chinese New Year would fall on the first day of the lunar month, and named it 春节chūn jié (Spring Festival) in Chinese. 元旦 (yuán dàn) would fall on January 1 of the Gregorian calendar, it is considered as the official start of the new year.