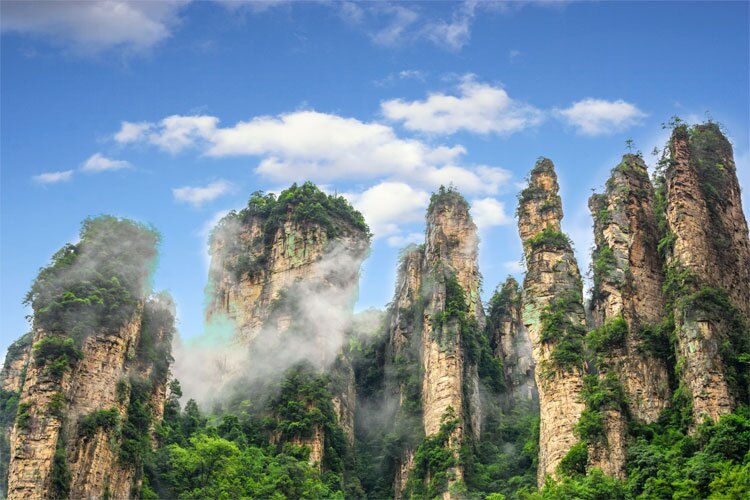 Quite naturally, the natural landscape of Zhangjiajie is beautiful as well as perhaps a little terrifying. For those who are fond of nature, want to seek adventure, and wish to escape from the daily hustle and bustle, Zhangjiajie is a must-see on your travel list.

Top Things to Do in Zhangjiajie

With its classic rocky tower scenery and natural wonders, Zhangjiajie National Forest Park is a must-see site for people who visit Zhangjiajie.

Taking a cable car up to the Avatar Hallelujah Mountains in Yuanjiajie, seeing the cloud at the top of Tianzi Mountain, visiting the Old House Area to experience the lesser-known beauty are three things not to be missed in the park.

Tianmen Mountain is the highest peak in the Zhangjiajie. It has become an adventure spot for increasing numbers of travelers.

Taking the world's longest mountain cable car up to the top of the mountain, walking along the terrifying glass-bottomed walkway circling the vertical cliffs, and trekking the 999 steps up to Tianmen Cave are three things not to be missed in this area.

Zhangjiajie Grand Canyon is well-known for its Glass Bridge which spans two steep cliffs with a length of 430 meters and is suspended 300 meters above the valley.

The great experiences here include walking on the world's longest and tallest glass-bottomed bridge, enjoying the grandeur of the steep cliffs on the “One Line Sky”, and walking along the Canyon Trail for views of cliffs, waterfalls, and the lush green forests.

When Is the Best Time to Visit Zhangjiajie?

Like the typical subtropical monsoon climate, Zhangjiajie has a long, rainy, and oftentimes humid summer, almost 200 rainy days in a year. But it doesn't affect the sightseeing since there is special beauty also on rainy days.

Although there are many great times to visit Zhangjiajie, the best time overall is late Autumn- the end of October, and throughout the month of November. Autumn is the beginning of the dry season, and the weather is not yet freezing, so it's a great time to visit.

Where to Stay in Zhangjiajie?

Being a major tourist destination the Zhangjiajie area has plenty of accommodation. Most of the hotels in the area are in one of two locations: downtown Zhangjiajie, and the Wulingyuan area.

Besides having a wide array of accommodation, the downtown area is convenient for travelers. Both the train station and airport are nearby, so visitors who arrive after park closing hours, can conveniently get a hotel downtown.

The biggest benefit to staying in Wulingyuan is that the parks are right on your doorstep. The biggest downside is that it is far from the city. Visitors landing in Zhangjiajie airport will have to get a bus or a taxi for up to another hour to get to a destination in Wulingyuan.

How to Get to Zhangjiajie?

Though Zhangjiajie is a small city surrounded by mountains, with an airport and railway stations, there is easy access to Zhangjiajie from major cities of China.

The quickest way to get to Zhangjiajie is by air. Big cities like Beijing, Shanghai, and Guangzhou have direct flights to Zhangjiajie Hehua International Airport.

Travel Zhangjiajie with Us