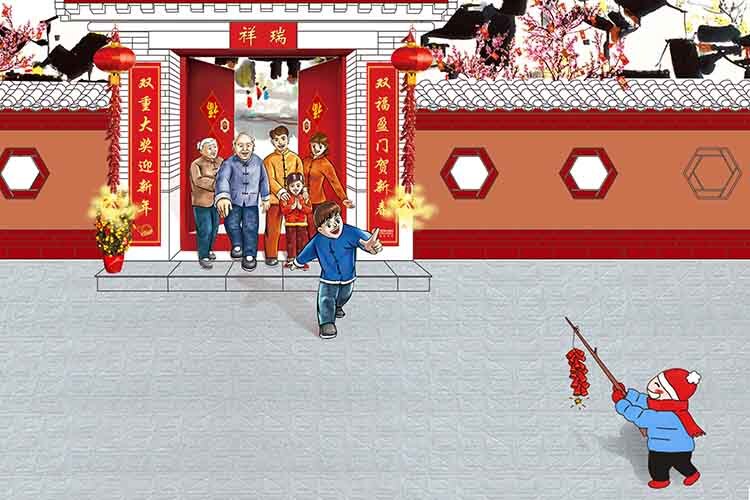 Chinese New Year is the most ceremonious traditional festival in China. It is a special celebration for every Chinese person throughout the world. On this page, we've listed the 14 most important facts about the Chinese New Year.

The date of the Chinese New Year varies from year to year as it is based on the Chinese lunar calendar. But the lunar new year generally takes place between January 21 and February 21.

2. Each Chinese New Year starts with a new animal.

Each Chinese lunar New Year starts with a new animal. There are 12 Chinese zodiac animals: Rat, Ox, Tiger, Rabbit, Dragon, Snake, Horse, Goat, Monkey, Rooster, Dog, and Pig. Each year is associated with an animal. 2023 is the year of the rabbit.

For the Chinese people, the lunar New Year is the most important start to the New Year. A good start also means a lucky new year. Red is the luckiest color in Chinese culture. It is a symbol of prosperity and wealth.

So red color is used everywhere for the Chinese New Year. People wear red clothes, hang red lanterns, paste red decorations, and give red envelopes... in the hope of a smooth and prosperous coming year.

4. There are many superstitions during the Chinese New Year.

Even in modern times, Chinese people are very Chinese and are superstitious during the new year even though they may not be so at other times.

The Spring Festival is a start of a new year. Chinese people believe what you do will then affect your luck in the coming year. There are many things you should not do because doing these things always means you will have bad luck the next year. These things include taking drugs, sweeping and taking out the garbage, saying unlucky words, etc. Read more on Things you should not do during the Chinese New Year.

5. Lunar New Year is an occasion to worship the ancestral.

The Chinese believe the lunar New Year is also an important occasion to worship their ancestors. During Chinese New Year’s eve, the head of the family leads the family to the shrine to pay respect to their ancestors and offer food. In doing so, they hope they will be blessed by their ancestors for a peaceful and prosperous next year.

6. It has different activities for each day during the Chinese New Year.

The Chinese New Year celebration lasts for 16 days beginning from New Year’s Eve to the Lantern Festival on day 15th.

There are different traditions and activities for each day based on their symbolic meanings. New Year’s eve is the most important day to bid farewell to the old and usher in the new. People do things with the meaning of sweeping all the rotten luck from the previous year out the door.

What you do today on New Year's Day is believed to affect your luck. So people try their best to do things that they think can bring them good luck such as setting off fireworks, giving each other best wishes, and giving children and elderly people red envelopes.

7. What to eat matters a lot for the coming year.

Eating lucky dishes at the Chinese New Year is believed to bring good luck to the next year. Otherwise, you will have a bad year. Lucky dishes are those which have auspicious meanings in Chinese culture such as fish, chicken, etc. Eating fish implies you will what more than you need the next year.

8. The festival is celebrated for 16 days.

It is the longest holiday in China. The festival is celebrated from the Chinese New Year's eve and continues to the Lantern Festival on the 15th of the first Lunar Month.

Read on the Chinese New Year Celebration to learn the Day-by-Day guide.

9. Wearing red underwear is a tradition.

The red color is believed the luckiest color in Chinese culture. Wearing red underwear is thought to ward off evil spirits and bring good luck. Chinese people usually wear red underwear in the hope of a peaceful next year.

When the Chinese New Year is coming, there is red underwear sold everywhere at the markets and supermarkets.

10. Billions of red envelopes are given out during the new year.

Red is the luckiest color in Chinese culture. Giving red envelopes means giving out best wishes. It is a tradition to give red from older to younger and from bosses to employees.

Parents usually give red envelopes to their children on New Year’s eve, which is believed to ward off evil spirits and bring good luck.

When going out to visit their relatives, if there are children or elder people aged more than 60 years old, people need to prepare red packets to give them.

11. It is actually known in China as the Spring Festival.

Chinese people believe that spring, the beginning of the year, is the most important time of the whole year. Chinese New Year usually falls after the first solar term "The Beginning of Spring" hence the name.

The festival also marks the end of the coldest days in China.

12. The whole country is on the move during the Spring Festival Travel Season.

For the Chinese, the most important part of the Spring Festival is to have a reunion dinner with their families, so no matter how far they are away, they will travel back for the festival.

The festival causes the world’s largest annual migration. There are 3.7 billion passenger journeys during the Spring Festival travel season (Chun Yun), a period of busy passenger transportation. It usually begins 15 days before Lunar New Year's Eve and lasts a total of 40 days.

13. Fireworks are set off to drive the evil spirits away.

More fireworks and firecrackers are set off on lunar New Year's Eve and on the morning of the first day of Spring Festival, than any other day in any other country in the world, to drive away evil spirits and celebrate the coming year.

14. Spring Festival can be a tough time for "some" old single.

So New Year's time becomes a very tough time for some single young people because they need to face their worried parents and even relatives.

A seemingly ridiculous method is to hire a boyfriend to go home.

15. The Lunar New Year is celebrated not only in China.

Spring Festival has gone global in recent years and there are increasing numbers of people in other countries celebrating Chinese New Year, for example, the UK, the USA, Australia, and other Asian countries.